Portion size has been linked to obesity, health issues with being overweight and mortality. And its not just portions of bad food either, most of us (me included) are used to having generous portions of healthy food too.

Just because a meal is healthy, i.e rice & fish & veg, doesn't mean you wont gain a few pounds if you over eat or have huge portions of it. Its still a surplus of calories which can lead to weight gain in the long run, of course fast food and junk food is a lot more calorie dense but that's not the case here.

Over the years serving and portion sizes, packets of food, groceries, take aways have increased 50-80% in size and even our home cooked meals have become influenced by this trend. Is it no coincidence that as our portions have grown so has our waistlines.

In the UK 69 studies were performed in order to assess food portion size. Exposure to larger food portions, packaging or crockery size was associated with moderately increased food consumption for adults and children. A meta-analyses of 13 of those studies found that increased portion or crockery size led to adults selecting a greater amount of food.

The researchers estimated that if smaller portion sizes were used consistently across meals, the average daily calorie consumption could be reduced by 144 to 228 calories per day. This would be equivalent to 4320 to 6840 less calories per month (51840-82080 calories per year) which would equal to a weight loss of 1-2 pounds (0.45kg to 0.9kg) of fat per month.

One simple way of cutting your portions sizes down is to use a smaller plate. It seems silly but it actually works, smaller diameter equals less plate surface to put food on. Plate size has crept up in diameter over the last 2-3 decades from 9 inches to 12 inches in diameter. Of course its all depends what you put on the plate but studies show that a larger plate does encourageyou to pile more food on your plate. Its called Portion Distortion, its almost like an optical illusion, with a larger plate it appears the portions are too small and thus not filling enough. So if you use a smaller or regular sized plate the same portion looks like its filling the entire plate and thus looks more filling and appetizing. Restaurants have been using this trick for years and it really works. Have a look below at what I mean..

The metabolism definitely has to be factored in when trying to reduce your waistline. The metabolism slows down every few years which basically that means you need less calories to fuel or maintain your body than you did a few years ago.

Your metabolic rate accounts for about 50 to 70 percent of total energy expenditure and is thought to decrease about 1-2 percent per decade. That is, after a person- reaches 20 years old, daily energy expenditure decreases about 150 calories per decade. The decline is probably due to decreased muscle mass (which is highly metabolically-active) and increased fat mass (which is relatively metabolically-inactive). But you can combat or slow this decline with regular cardio and resistance exercise and of course watching your portions will help you to stay lean as you get older.

Now of course I'm not implying to cut back your portions to the point that your restricting calories or purposely going hungry or starving which is very unhealthy. What I'm saying is that we are all overeating and its leading to being unhealthy, overweight and obese. You will not be making any sacrifice by eating the correct portion sizes, you will simply be eating slightly less or the correct and healthy amount for your bodies needs. I have put these methods into use myself and I have been very happy with the results and I always recommend the same to my clients who also enjoy the results. Have a look at the chart below for an easy way to estimate the right sized portions for you.

So what are you waiting for, start putting these tips into practice right away and see the results for yourself. 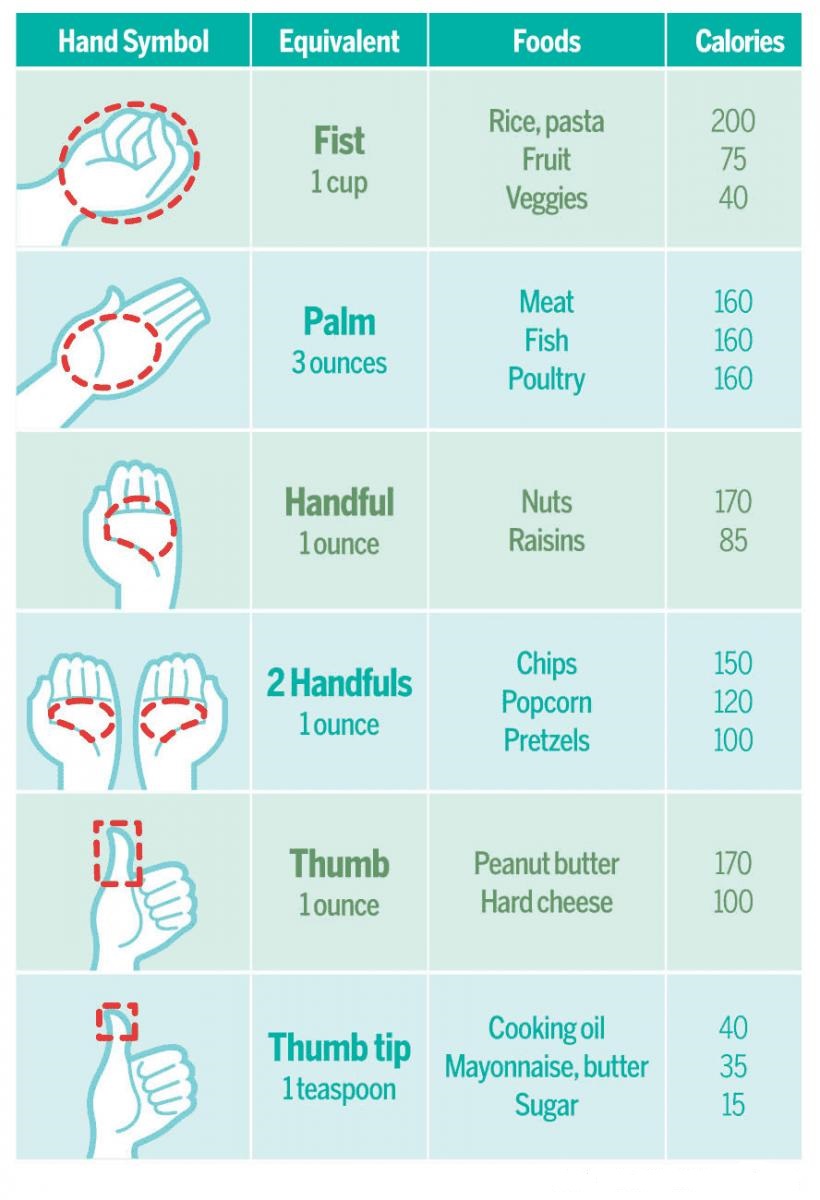